I’ve been intrigued by Reynolds’s Paris office ever since I started researching his London office for my book Dickens, Reynolds and Mayhew on Wellington Street: The Print Culture of a Victorian Street (2015). If Reynolds’s London office was located within a significant hub for metropolitan theatre, journalism, and publishing, I wondered, could the same be true of his Paris office? What might his building have looked like? Who might have been his neighbours? What might his daily life have been like: what would he have seen, heard, smelt? There is so much we don’t know about Reynolds’s life, but maybe an investigation into the places he knew could be a way of filling in some gaps in his biography.

The Reynolds brothers took over the English-language bookshop at 55 Rue Neuve-Saint Augustine in 183?. But no-one has yet definitively proven where this address was. So when I was in Paris in September I decided to see if I could track down Reynolds’s building. I can’t report back on any definitive results, but I can share some interesting findings.

Jennifer Conary kindly helped me: she told me that an advertisement for the bookshop in a Paris newspaper described 55 rue Neuve St. Augustin as “One door from 11 rue de la Paix, in the vicinity of the Tulieries and the Place Vendome.”  Rue de la Paix still exists, so that gave me a starting point.  It’s only about four blocks from Galignani’s current bookshop, and not far from their 1840s location at 18 Rue Vivienne, when they were Reynolds’ French booksellers.

The signs were promising: Rue de la Paix (which runs south-west between Place De l’Opéra and Place Vendôme) is bisected by a cross street, Rue Daunou. This street meets the present-day Rue Saint-Augustine at Avenue de l’Opera. Could Rue Daunou be the original Rue Saint-Augustine, renamed after Hausmann’s remodelling of Paris?

The first stumbling block was that 11 Rue de la Paix was not clearly identified. However, with a bit of guess work and deduction, we found number 13 and worked up from there. The next question was: how to get from there to Reynolds’s address? We began to wonder if ‘one door from 11 rue de la Paix’ in fact meant ‘one door around the corner’. This would put number 55 on the end of Rue Daunau. Ironically, that building is now home to another London export, this time a luxury one: a branch of Alfred Dunhill! Yet small street, in a district of theatres and bookshops, seemed plausible a spot for Reynolds’s first major business venture. My next step is to check what we saw on the ground against an 1830s map of Paris. 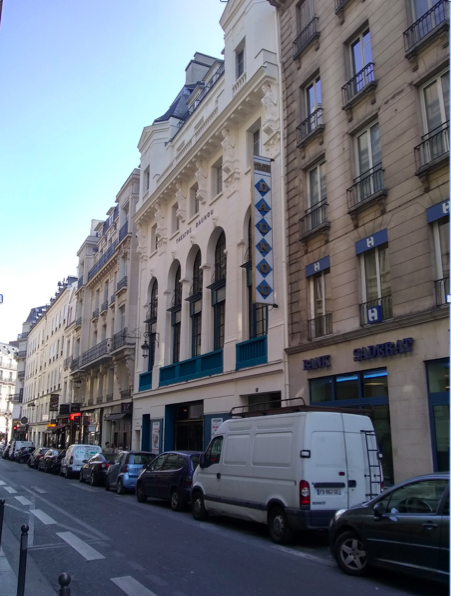 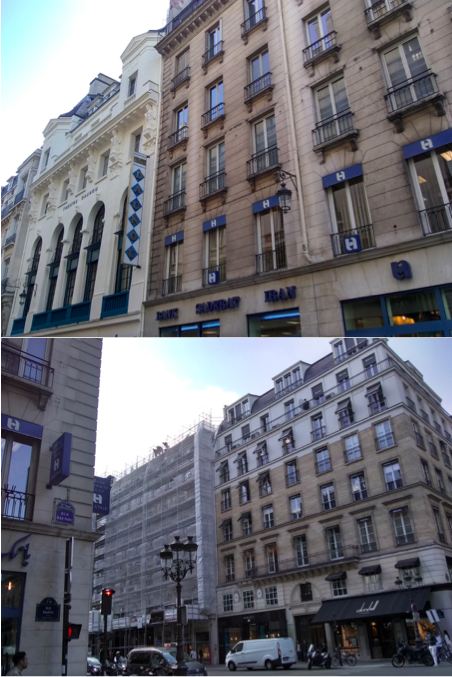 As a connoisseur of streets and their networks, one of the really curious facts for me about Reynolds’s time in Paris is that Rue Neuve-Saint Augustine was where WM Thackeray lived during the time that Reynolds was there (Shannon, 117 n. 6). They could have been no more than a few doors away from each other. And yet Thackeray never mentions Reynolds in his reminiscences of 1830s Paris Bohemia. So many blanks in Reynolds’s biography abound. However, an attention to place and the conditions of locality can help to plug the gaps in the written record. We find traces of Reynolds in Parisian periodicals, but perhaps we can also find traces of him by following his footsteps on the ground.