My Reynolds enthusiasm started on the treadmill.

I turned to endurance sports as a coping mechanism in graduate school and found a beautiful harmony between long, slow runs in the mountains and long, slow Victorian audiobooks. Back then it was Dickens, of course. But eventually, G. W. M. Reynolds came on my radar, and I was delighted to discover that the free LibriVox audio for The Mysteries of London’s volume one, part one lasted almost twenty-three hours. Part two was twenty-four hours, and then there was a whole second volume! That’s a lot of running time. But I was training for a marathon and looked forward to the company of cross-dressing, weapon wielding, plucky gals, like Ellen Monroe and Eliza Sydney. And the passionate political digressions always fired me up, too.

Normally, I’m an outdoor runner, but one day I was induced to run on the treadmill because of inclement weather. I find it painfully boring to stare at the wall in front of me while working up a sweat, but I took solace in the fact that I had a snappy story to listen to. So, I began running. Then one of those incredible moments of synchronicity occurred: the treadmill turned up in The Mysteries of London!

Richard Markham, the virtuous but naïve hero, was just imprisoned for attending a gambling den, which he was induced to visit by deceitful friends. Upon demonstrating his ample means to the guards, Richard is invited to spend the night in the main room with the officers. He subsequently witnesses all of the other unfortunates who are brought in on different charges. Among them is “a poor ragged, half-starved, and emaciated lad, without shoes and stockings” who is apprehended on the grounds of being “a rogue and a vagabond” because, as the constable says, “he’s wandering about and hasn’t nowhere to go to, and no friends to refer to; and I saw him begging.” [1] Richard is aghast to hear that the boy will get “[t]hree months on the stepper—the treadmill, to be sure” (95).

Through Richard’s perspective, the reader comes to see the stepper as a cruel punishment for the unjustly incarcerated poor. The narrative later compounds this critique by alternately presenting a conversation between the Home Secretary and the new magistrate of Marlborough Street, Mr. Teynham: “I need scarcely inform you,” the Minister says, “that the treadmill is not for the aristocracy” (805). He further maintains: “If a low person chooses to divert himself with aristocratic amusements [he means childish disturbances of the peace, such as wrenching off knockers, pulling down bells, and other pranks], punish him—do not spare him—spend him to the treadmill. In the same way that game is preserved for the sport of the upper classes, so must the knockers and the bells be saved from spoliation by the lower orders” (805). The treadmill thus becomes a potent symbol of legal disparity between the rich and poor, which The Mysteries of London so scathingly condemns.

As I ran, I ruminated on the irony of the treadmill’s history. Originally, the machine was designed to punish the criminal and disenfranchised population. Today, it is an expensive commodity sought after by the wealthy (a high-quality treadmill costs $3,700). Beyond investing in the device or gym membership, exercising on the treadmill requires an expenditure of time and energy, which are certainly privileges. I thought guiltily of the “poor ragged, half-starved, and emaciated lad” who was sent to the treadmill for three months in Reynolds’s story. Although this was a work of fiction, I knew from Reynolds’s frequent footnotes that the injustices on which he reports were based on real cases. My hour of leisure time spent willfully on this machine appeared like an acute form of sadism in comparison. But when I finished my workout and hit pause on the Mysteries, I felt an extra sense of gratitude for the hot shower and refrigerator full of food that awaited me at home.

I became obsessed with tracking the presence of treadmills across The Mysteries of London. Surprisingly, it comes up a lot. This machine appears most damaging, however, in Anthony “Tony” Tidkins’s autobiography. When we are first introduced to this character, he is a ruthless, fearsome criminal known as the Resurrection Man. Yet halfway through the series, we learn from Tony that he initially resisted a life of crime with great perseverance. Although his father was a smuggler, young Tony sought to earn honest employment. Still, due to his father’s incarceration, not even the humblest merchant would hire the earnest lad because of his supposed bad blood. Tony was therefore compelled to take up smuggling and grave robbing to support himself and his parents. Yet after a prison stint at the hulks, shipwreck, and devastating heartbreak, Tony set off on the road to leave that life behind him. On the brink of starvation, he ate a turnip from someone’s land, for which he was arrested as a “rogue and a vagabond” (543). He was thus committed to one month on the treadmill. Tony’s explanation of this punishment and its effects mirrors Reynolds’s ideology and rhetorical prowess. It is therefore worth reproducing in full:

The treadmill is a horrible punishment: it is too bad even for those that are really rogues and vagabonds. The weak and the strong take the same turn, without any distinction; and I have seen men fall down fainting upon the platform, with the risk of having their legs or arms smashed by the wheel, through sheer exhaustion. Then the miserable fare that one receives in prison renders him more fit for an hospital than for the violent labour of the treadmill.

I had been two years at the hulks, and was not hardened: I had been a smuggler and a body-snatcher, and was not hardened:—but this one month’s imprisonment and spell at the treadmill did harden me—and hardened me completely! I could not see any advantage in being good. I could not find out any inducement to be honest. As for a desire to lead an honourable life, that was absurd. I now laughed the idea to scorn; and I swore within myself that whenever I did commence a course of crime, I would be an unsparing demon at my work. Oh! how I then detested the very name of virtue. ‘The rich look upon the poor as degraded reptiles that are born in infamy and that cannot possibly possess a good instinct,’ I reasoned within myself. ‘Let a rich man accuse a poor man before a justice, a jury, or a judge, and see how quick the poor wretch is condemned! The aristocracy hold the lower classes in horror and abhorrence. The legislature thinks that if it does not make the most grinding laws to keep down the poor, the poor will rise up and commit the most unheard-of atrocities. In fact the rich are prepared to believe any infamy which is imputed to the poor.’ It was thus that I reasoned; and I looked forward to the day of my release with a burning—maddening—drunken joy! (543)

It is quite striking how Tony indicts his month on the treadmill as the single experience responsible for “hardening” him into an unrepentant criminal. He suggests that this instrument is uniquely unjust in its application of punishment, for “the weak and the strong take the same turn, without any distinction.” Tony, like Reynolds, suggests that blunt equality is not the foundation of a just society, for individual circumstances must be taken into account. This principle does not only apply to punishment, as Tony observes. In his nonfiction, Reynolds similarly affirms the fairness of inequality in regard to wages. In the first of his “Letters to the Industrious Classes” Reynolds asserts:

I do not say that you should equally share the profits of your employer: I admit that he must be adequately recompensed for his outlay of capital, the interest on that capital, the risk he incurs, the bad debts that may deteriorate his profits, and the anxiety of mind invariably attendant on the spirit of speculation. These reasons will show why his gains, my friends, should in justice be larger than your’s. [2]

Remarkably, Reynolds places economic value on the painful affective state, the “anxiety of mind,” that accompanies speculation. His sense of justice is clearly a subjective one, which takes into consideration a variety of material and emotional components.

Accordingly, just as Tony bristles at the inhumane equality of the treadmill’s punishment, he also implicitly supports the individualized sentence of laboring on the docks, where each person works according to his own capacity. Whereas the hulks did not erase his desire to pursue honest employment, the treadmill utterly annihilates his virtuous aspirations. Above all, the mechanized punishment inspires Tony with an inflaming affect of resistance: he anticipates his release “with a burning—maddening—drunken joy!” The unfeeling machine thus inspires an intemperate emotional response that foreshadows future violence.

Tony ends his tale by explaining how he rapturously embraces a life of crime. First, he broke into the house of the justice who arrested him for eating the turnip, then ate his fill of the fine food and stole the plate. Upon leaving the justice’s home, he passed the magistrate’s barn: “I owed him a recompense for my month at the treadmill,” proclaims Tony, “and I thought I might as well add Incendiary to my other titles of Rogue and Vagabond. Besides, I longed for mischief—the world had persecuted me quite long enough, the hour of retaliation had arrived” (545). His vengeance takes a spectacular form: setting fire to the magistrate’s barn, then relishing the sight of the conflagration from a nearby hill. “Happy! this is not the word! I was mad—intoxicated—delirious with joy. I literally danced as I saw the barn burning,” he exclaims (545). It is likely that Tony’s unmitigated enthusiasm here would have caused upper-class readers to dread their own safety. For the pyromaniac concludes: “And the upper classes wonder that there are so many incendiary fires: my only surprise is, that there are so few! Ah! the Lucifer-match is a fearful weapon in the hands of the man whom the laws, the aristocracy, and the present state of society have ground down to the very dust” (545). 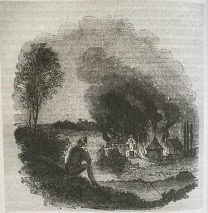 I will confess to guffawing audibly when I heard this line. Tony’s barn-burning song that follows is also a real gem, though I’ll leave that to you, reader, to look up on your own.

What interested me most, however, was the uncanny alignment between Tony’s and my own affective reaction to the treadmill (forgive me for treating this fictional character like a real person for a moment). Both of us, I realized, were affectively charged and galvanized to action by time spent on the machine. Tony, who is forced onto the treadmill, responds with explosive violence. But my volitional engagement with the device energizes me for hours of writing, reading, and teaching. There is, in fact, a large body of scientific research that supports my anecdotal experience, and I would encourage any reader who feels stuck in their work to go out for a brisk walk or easy jog.

Reynolds, that prolific writer, was no stranger to endurance. And I bet he’d like the modern treadmill. Besides the fact that it’s no longer an institutionalized punishment, the treadmill today aligns with Reynolds’s insistence on individualization. You can adjust the speed, the incline, the interval time, and the total time. It is your workout. And it offers an opportunity to cultivate those Victorian values that Reynolds affirms time and time again in The Mysteries of London— “fortitude and self-possession”—which remain the touchstones (for better or worse) of our society today (895).

Samantha Morse will receive her PhD in English from the University of California: Los Angeles in June 2020. Her research interests include long-nineteenth century Gothic fiction, affect theory, and the relationship between literature and politics.